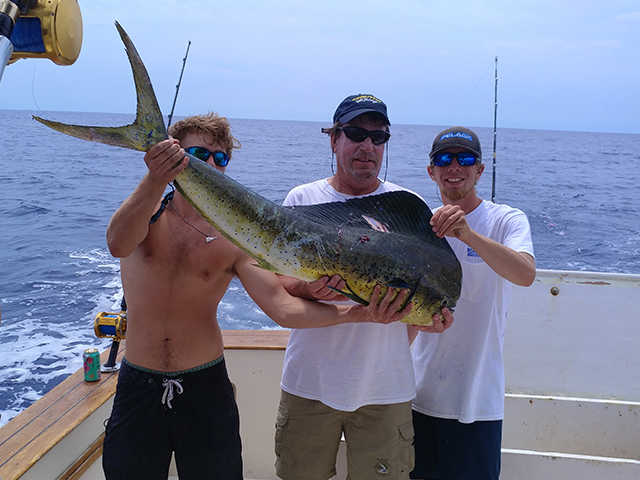 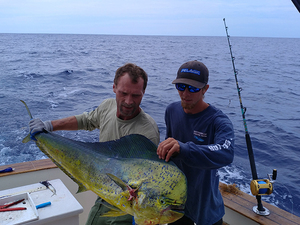 With 20 boats entered and the seas a little sporty Pipe Dream III got under way at 3am. Because of a head sea it was slow going and we finally got to the ledge at 6:30am.

Pulling skirted and naked ballyhoo for bait it wasn’t long before the first strike and a few minutes later put a 20 lb. Mahi in the box.

The team which included Tandy Morton, Butch Miller, Eric Rose, Mike Hart, the Mate Trey Andrews and myself, are some of the best local anglers when it comes to fighting fish and boated every fish hooked but none were big enough to put Pipe Dream III in the money.

The following day, leaving the dock again at 3am for another adventure of offshore fishing Amelia Island with much better sea conditions, the Turner family spent the day at the Gulf Stream. 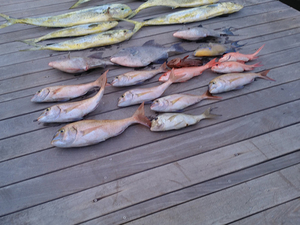 It didn’t take long and the Mrs. battled her first Mahi, after a 15 minute fight and the mate ready with gaff in hand the 20 pounder struggling to get free finally won the battle and threw the hook.

Later in the morning with a screaming sound from the Penn Int’l 50 the mate grab the rod, handed it off to the Son and again the battle was on.

Fighting this Mahi for 20 minutes he tired the fish like a pro and the mate brought this 40 pounder onboard.

The Turner Family went 8 for 14 Mahi with the biggest being 40 lb. and then bottom fished finishing the day with a nice catch of Trigger, Bees and 8 Mahi.

Yes, a good time was had by all!

Had a great time with the Family. Capt. Scott and his deck hand Trey and Ronnie did a great job. Thank You. With their help i caught the biggest fish of my life. Was a great experience.Not only did i but my Mother and my SISTER caught a fish that they will remember for a lifetime. that was cool. With the help of the Capt. and deck hands THE TURNER FAMILY HAD A GREAT DAY.HIGHLY recomend PIPEDREAMSCHARTER for your deep sea fishing experience.THANK YOU